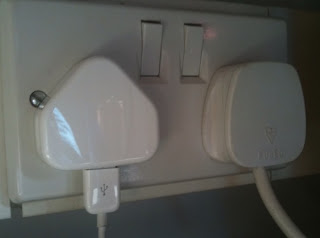 Last year I recall a campaign followed by a fanfare announcement that mobile phone manufacturers had finally agreed a new standard power adaptor that would be interchangeable for many models and makes, instead of requiring a different one for each. This seemed a bit odd to me, given that most people only have one phone and therefore still only need one charger when they travel around. Taking into account the above Apple example, isn't it better to aim for a well designed pocketable adaptor which provides a standard USB power level output, rather than a new additional standard, which everyone again will implement in horrible ugly ways?
Posted by Jonathan at 14:28

Jonathan
I was until July 2011 an independent freelance Futurologist, looking at the long term future effects of disruptive technologies on people, business and society. Since then I have taken up a role with the then Technology Strategy Board, now Innovate UK, as ICT lead technologist. I am currently a futurist, responsible for Horizon Scanning and an Innovation Lead for the Analysis for Innovators programme. I also have more than 20 years experience working for a large communications company, as a research scientist, as a technology consultant and latterly as their futurologist.